In celebration of Valentine’s Day, I asked readers to write a love letter to their DINOS and picked a winning essay.  Over the next few weeks, I’ll be sharing all of the entries.

The Skye’s the Limit: A Love Story about my DINOS

August 2006 our journey began. I was 15 years old and we were driving to Ohio to pick up my very own puppy. He was my life long dream. I had been saving for a Border Collie of my very own. I had huge plans for us. We would compete in agility, he would be a therapy dog, he would know tons of tricks, he would wow everyone he met.

He was an awesome puppy. He never destroyed a thing and got along GREAT with our Golden. He loved our cat (who didn’t always love him back). He loved all the kids we babysat at the time. Tennis Balls are his all time favorite toy of choice. 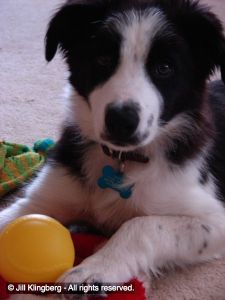 Then he started puppy classes. That’s where things got tricky. He would go after the other puppies if they tried to play with him. He didn’t like everything going on. It was still very manageable though. He even pretty much grew out of it for a while. He went to work with me at the kennel, around other dogs and everything.

When he was around a year old we moved. That’s when my dreams got shattered. We started classes for agility. The first night I left in tears. While he did the agility part well. He bit my hands so many times that one night. from reacting to other dogs, I was ready to not go back.

We did though. We switched classes and were blessed with an AMAZING trainer who never ever gave up on us. We worked for almost a year. Slowly we saw him be able to handle being around other dogs. Not without MANY tears from me though. As a 16 year old at the time, people say I handled it with greater poise than most adults would.  However, I had my days when I felt like giving up. I had people constantly telling me to give up and let him go. Nothing would ever change, he will never compete, he will never be able to see another dog.

Skye is almost 6 now. He now has 6 agility titles and working on more. Last year he completed his CGC evaluation with FLYING colors. He is commonly mistaken for a service dog when taken out he is so well-behaved. We even added another dog to the house with few problems.  It was a long road, but we made it.

He amazes me everyday. He is the reason I get up in the morning and the reason I can sleep at night. He never lets anything get him down. 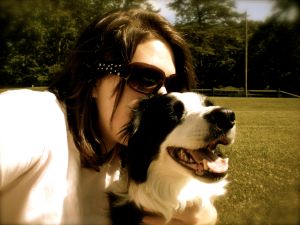 We still have our moments but we make it through. People say I am the reason we are able to be the team that we are now. But it’s not me, it’s him. I couldn’t have done it without his undying love for me or his willingness to keep trying. Whether we are on the agility field making people say “wow, what a team” or just walking on the street he is everything to me.

So if you are out there and think there is no hope for you to do anything,  just keep going.  Believe in what you CAN do. Not what people say you CAN’T.