In another lifetime I worked at an Irish bar in Philadelphia called Moriarty’s. The staff back in those days was a pretty awesome bunch. One of them was the artist Christina Hess.

More than a decade later, Christina is the brilliance behind the recently released project Animal From History:

I love this series of illustrations. A lot. Lucky for me (and you) Chris was up for a few questions about her work. Let’s dive in!

Jessica: What was the inspiration behind Animals From History?

Christina: Animals and history always interested me, but this project came together for a few reasons. I painted a white cat (Queen Elhissabeth) for a client who wanted his cat immortalized as a queen. I did some research and felt that a generic queen would not have been as fun to do as someone that actually existed.  So I researched Queen Elisabeth and I found wonderful imagery that I could pull from. It ended up resonating with many people. 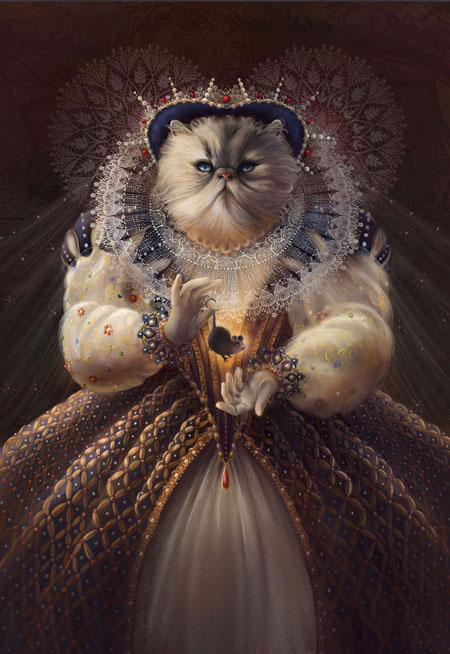 Another inspiration was our Basset Hound, Roscoe. He was a character and gave me a lot of stories. I often wondered what he would be saying if he were human and I coincided his rumbles with famous quotes or lyrics from songs.

At that point I felt like it would be a really fun project to bring together animals and history to make a world that I could continue working with.

J: Now that I’ve seen William Wallace as a scruffy terrier and Joan of Arc as a dignified German Shepherd, I can’t imagine them as any other kind of dog. How do you choose a particular animal and historical figure pairing? Does the person’s animal alter ego speak to you or vice versa?

C: It’s funny because when I first started this idea I had wild animals involved and had animal/human personalities match up. But then it took a domestic animal turn. I had used Kickstarter.com for funding the project and through that I offered original artwork of people’s pets as their choice of historical figures.

What I found is that people did not associate their pet as a personality because of looks or general attitude – it was all about the individual animal. Sometimes the choice lined up perfectly – like Kiddy Roosevelt. The cat really looked like Teddy Roosevelt!

It really became a community project and I learned so much about people’s pets. For example, the dogs behind Joan of Bark and Henry V are canine siblings in real life. When “Henry” moved in with “Joan” she terrorized him quite a bit.  So their owner and backer thought that two opposing personalities were appropriate for both of her German Shepherds.

With the wild animals I wanted to pair the personalities of them with the people. Snow leopards rarely stay together, as The Fitzgeralds did not. Mountain Lions are loners who are ruthless, hence the portrayal as Steve Jobs.

J: Your late dog Roscoe, an adorable Basset Hound, is depicted as Napoleon. What inspired that particular pairing?

C: The obvious short man syndrome applies to his breed a lot. Those Bassets act like big boys, including my Roscoe! He was also very vociferous and had a bit of prissiness to him that reminded me of Napoleon and his pushy personality. He was short, pushy, loud, obnoxious and loved french bread. I’m not kidding…bread was his catnip! He had a big personality, as did Napoleon.

Also, I really wanted him to hide his paw, so it appears he is scratching his own belly.

J: Is there an animal or a historical figure you’re dying to bring to life next?

C: Many! I’m currently working on a pit bull as Queen Bessie Coleman and have many others on the list. Mary Shelly as a skunk. The Wright Brothers as Kiwi birds. Frank Lloyd Wright as a Greyhound, John Smith and Pocahontas as a deer and wolf. The list goes on… 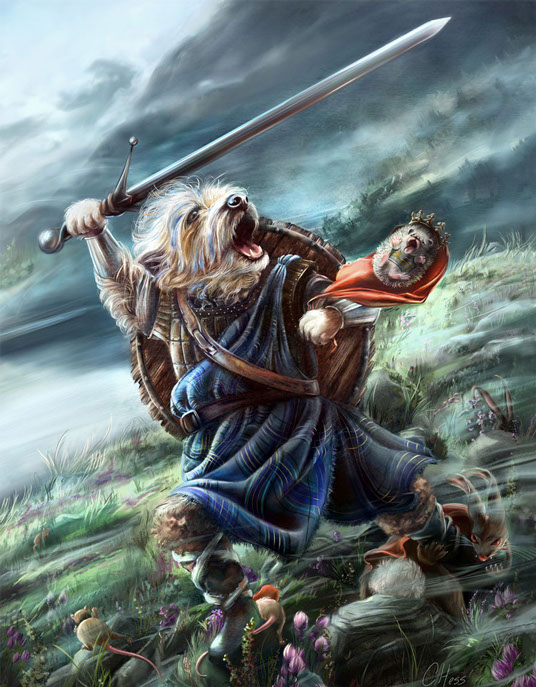 J: Where can we see more Animals From History? Is the Ebook available to purchase?

C: Right now the images are online at ChristinaHess.com and AnimalsFromHistory.com. I also have them for sale in print form and in a 2014 calendar. I had to postpone the eBook, because I’m reworking some of the writing in order for my agent to pitch it to publishers. Hopefully it’ll be out by next year. I’ll keep you posted. Wish me luck!

I can’t wait for the book – I have no doubt it will be a huge success! Thank you for the interview Chris!

Tags: animals from history, books, Christina Hess, dogs
From: uncategorized
← Should I Leash My Dog? [Flowchart]
Please Stop Neglecting Yourself: You’re Too Important To Ignore →
5 Comments