In the last couple of weeks I’ve seen a post called Swedish Yellow Dog making its way across social media. It encourages dog owners to use a little yellow ribbon on their dog’s leashes to indicate that their dog needs space. People really seem to dig the idea.  And for good reason – it’s a smart idea! 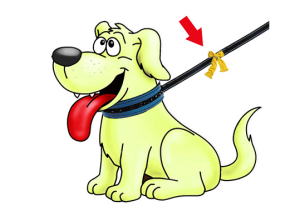 On this side of the pond, my buddies over at Dog Flags introduced a handy color coded system for dogs that covers a variety of messages, from “Friendly” green flags to “Ask Before Approaching” red ones. 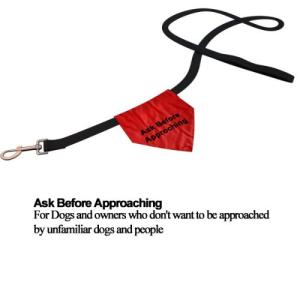 I’m a big fan of any system that helps people communicate with each other (especially from a distance), so that their dogs don’t have to deal with unwanted encounters. It’s a great way to “talk” to other people about your dog’s needs, without having to say a word.

Dog training centers, dog parks, pack walks, dog competitions and other dog groups have been using the color system to communicate their dogs needs for a long time, typically using red as the color for dogs that should not be approached without permission.

The DINOS logo dog (inspired by my Beagle mix Birdie) is wearing a red bandana for this very reason:

But there’s a little problem: only the doggiest of dog people know what these colors mean.

And only polite dog people care enough to respect the color system.

That’s why they work so well in closed groups, like pack walks or dog camps. Every one is on the same page and working towards creating a positive experience for all dogs. It’s responsible dog ownership and interaction at its best.

It seems that the only way a color coded system will work out in the wilds of the public is if there’s a huge PR campaign launched to educate the average person about the meaning behind the color system and what to do when they see a red or yellow flag.

Oh, and we have to settle on a color. I’m all for red, for DINOS, obvs.

This campaign would need to cross all sectors of the pet industry: dog trainers, vet offices, humane groups, boarding and grooming, pet publications, retail, etc. and would need to be promoted uniformly in a variety of mediums. The message would need to be clear, concise, and consistent. If various companies marketed their own color coded products and kept changing the messaging, it would confuse the public.

And even then, we’d have to be content with the fact that despite a big push, only a small portion of the public will internalize and respect the color system.

We know this because: half of us walk around with t-shirts that say “Keep Back” while our dogs are wearing bright orange flak jackets that read “GET AWAY FROM ME!” and shoot off warning blasts, but yet…people still come over to pet them, while commenting about their ritzy coats. Sigh.

And a color system won’t even put a dent in one of our biggest problems: off leash dogs that are not under voice control or are roaming unsupervised.

But should we try anyway?

If more people were aware that a dog wearing a red bandana, Dog Flag, or ribbon on their leash needed space and knew they needed to ask permission before approaching, I have no doubt that some dogs would be spared some unwanted interactions with other dogs and/or people.

But I don’t think that any dog should have to wear a color-coded item in order to be treated with respect by others. I’d rather teach everyone to be respectful of ALL dogs.

So what do you think? Is it time for a color coded PR blast? Will people really get the message or is it just another layer of confusion in this dog-avoids-dog world? Have you tried a color system? Are there down sides to this idea?

December update: The color debate is an international conversation with many pros and cons. At this time DINOS™ is not officially associated with any color system. You can read more about the yellow ribbon idea here.

Tags: DINOS, dog walking, dogs, yellow ribbon
From: DINOS, people problems
← The Vet’s Office: Waiting Room or Dog Park?
How I Failed as a Rescuer: Lessons from a Sanctuary →
24 Comments